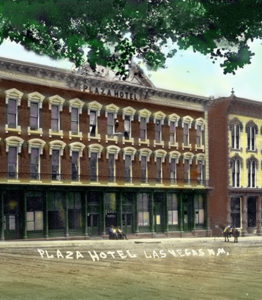 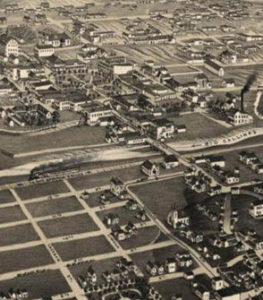 In the 1880’s Las Vegas NM was the big town, bigger and richer than Santa Fe or Albuquerque. There are nearly 1000 buildings here on the National Register of Historic Places! The heart of the City was beautiful Plaza Park – still the prettiest plaza in the Southwest. And presiding over the park was the Plaza Hotel, the finest in New Mexico Territory – until the astounding Montezuma Resort was built a few miles west at the hot springs. The hotel looks just like it did when built – a grand Victorian façade with three floors of 14’ ceilings and huge windows overlooking the Plaza, topped like a wedding cake with fanciful scrolls. Originally there were 37 guest rooms, a saloon, dance hall and restaurant. Matching walnut staircases wind elegantly from the lobby to all floors. Then and now everyone stayed here, from Doc Holiday to Tommy Lee Jones. The Plaza Hotel has starred in movies and TV from Tom Mix silent pictures to Longmire, Easy Rider and No Country for Old Men. The Plaza Hotel had an award winning million-dollar renovation in 1982.

While the Plaza Hotel was going up Charles Ilfeld began building Ilfeld’s Department Store next door. Business was so good that in 1891 Ilfeld added on, tripling the size of his Italianate masterpiece. This was the biggest department store in the Southwest, renowned as the Grand Emporium. In 2006 the Ilfeld building was added to the Plaza Hotel with a $5 million renovation. The new addition provided 35 additional guest rooms with a grand Ballroom and meeting space, making the Plaza Hotel the ideal choice for receptions, reunions and conferences in northeast New Mexico.

In 2014 the Plaza and Ilfeld buildings were purchased by Allan Affeldt, who with his team restored the legendary La Posada Hotel in Winslow AZ. Allan also bought the Castaneda Hotel across town, and the Ilfeld office building on the Plaza. Already they have put another $1 million into improvements at the Plaza and completed plans for the Castaneda, in what is one of the most highly anticipated restorations in New Mexico. Says Allan:

“We plan to work our way through the Plaza Hotel and then the Castaneda – room by room to create a treasure house of New Mexico art and history. Already we have expanded the ballroom, doubled the bar, brought in historic furniture from La Fonda in Santa Fe, replaced the linens and beds, and rebuilt the front desk, kitchen and dining room. We have a lot to do, but we promise it will be a little better, every time you come. Your visits will help us restore these wonderful buildings and this remarkable town. We hope to earn your repeat business, and to see you soon!”

A Story of Revival

In the 1870’s Las Vegas was the biggest city in New Mexico territory, and growing fast! Land baron Benigno Romero and his friends decided Las Vegas needed a first-class hotel, so in 1881 they rounded up the cash and built the Plaza Hotel. It was a partnership of Spanish Catholic merchants, French Protestant traders and German Jewish immigrants – a good model for our times! In the 1880’s the dining room was where the bar is now, north of the lobby overlooking the Plaza Park. It was called ‘The Plaza Supper Club’. The kitchen was on the north side of the hotel where the La Fonda headboards are on the walls now. The hallway leading to the Ilfeld wing was just a door out to an alley between the buildings. The current dining room was originally two retail spaces divided by a wall where the columns are now, with big doors and windows on to the Plaza. Behind this to the south – now the kitchen – was a huge dance hall. In the 1970’s most of the Plaza and Bridge Street was abandoned. In the 1980’s Wid Slick and his partners bought the Plaza Hotel and renovated all of the public spaces. They put the dining room and bar where they are now and built a new kitchen where the old dance hall was. The cast iron columns – 800 pounds each!- were moved here from the original dance hall.

The Plaza dining room and Saloon were restored in 2014-2015. Jorden Grimm and his crew are responsible for the beautiful room. The golden Venetian Plaster walls were done by Alex Darley – this is the only Venetian Plaster dining room we know of in the USA. Bob Black did all the wood paneling. Prices Furniture down on Douglas provided the dining room floor. Steve’s Woodworking handcrafted our front desk and bar. In the bar the wood floor is original, and Burt Bazan laid the true Victorian Encaustic tile floor and wainscot. The wall hangings are all real Navajo rugs woven here in New Mexico. Richard Cousins did all of the upholstery. The Santos were made by Margarito Mondragon & Peter Lopez. The lobby floor was milled right here in Vegas by Old Wood wood products of native fir. All of these people live and work in Las Vegas, New Mexico. By staying, dining and drinking here you are helping to support local artists and craftspeople. Thank you!